Most industry experts believe the Government will meet the electricity sub-target, but success in this sector will not compensate for underperformance in heat and transport. It is not yet halfway towards 12% in heat [2] (and the proportion of renewable energy used in transport fell in 2016).

Sources of UK renewable energy and current progress to targets

Biomass dominates the supply of UK renewable energy, as shown in the pie chart: 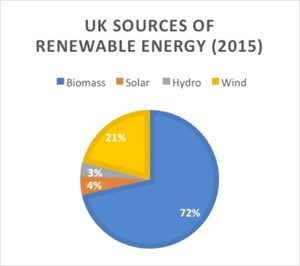 [1] Under the 2009 EU Renewable Energy Directive

Find out more about the biomass sector